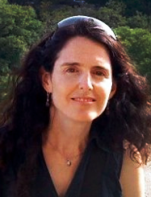 This Thursday, October 25, at 4:30 p.m. in the Studio Theatre (2nd floor at 7th + Jordan), Anne Garcia-Romero will discuss scholarship, art, and the ways they intersect.

Anne Garcia-Romero is a playwright, screenwriter, and scholar whose work has been developed and produced at, among other venues, the New York Shakespeare Festival/Public Theater, The Mark Taper Forum, Hartford Stage, South Coast Rep, Eugene O’Neill National Playwrights Converence, HERE, INTAR, and the National Hispanic Cultural Center. She is currently creating a screenplay from her play Mary Peabody in Cuba, working with actor/director/producer Andy Garcia. She has also written for Peninsula Films, Elysian Films, and Disney Creative Entertainment. Her plays are published by Broadway Play Publishing, Playscripts, and NoPassport Press. Her work has also been published in The Best Women’s Stage Monologues of 2008 and The Best Stage Scenes of 2008 (Smith & Kraus). Her most recent book project is Contemporary Latina Theater: Transcultural Voices.

Currently an Assistant Professor in the Department of Film, Television and Theatre at the University of Notre Dame, Anne Garcia-Romero is a Resident Playwright at Chicago Dramatists. She received her MFA from The Yale School of Drama and her PhD from UC SantaBarbara.

In his director’s note, Eric shares his interest in both the playwright and her play, which he translated and directed:

“I first met Lucienne last year at an event titled Dramaturgia Concisa e Contemporânea (Concise and Contemporary Playwriting), where playwrights have 90 minutes to write a 5-10 minute scene which will be performed that night; Lucienne was the winner that night. The following week I attended her play Banda Hamlet, a rock show where the characters from Hamlet come back from the dead to retell their stories using popular music. I was hooked from that point. And since even award-winning contemporary playwrights from Brazil are unfortunately unknown in the United States, I decided to bring one of her plays to you.”

A founding member of Teatro da Vertigem (Vertigo Theatre), as well as a member of Cia. dos Dramaturgos (Company of Playwrights), Fahrer has been principal at the Free School of Theatre in Santo André and a resident-artist at the São Paulo School of Theatre. In addition to her career as a professional artist, she is now pursing a doctoral degree from the University of São Paulo.

It is an interesting turn of events that the first fully staged production of Refusing the Flower should be in English rather than Portuguese. The play’s translation and eventual production served as a practice as research project for Eric who plans to pursue translation theory in his dissertation next year. In part, Refusing the Flower’s American premiere asked questions key to Eric’s research about how meaning is transmitted when both actors and spectators are working in a language that they have no prior experience with:

“The history of translation is marked by a pendulum swing of public opinion regarding its validity as a practice. Romans translated and adapted Greek theatre, believing that by putting it into Latin they improved it. Later, early translations of the Bible into languages other than Latin brought people to the stake to be burned. But whatever the opinion towards translation’s viability, we often take translation for granted in the theatre world. Partially in order to combat this tendency, and also to demonstrate the validity of bilingualism in American theatre, for this production I’ve maintained some of the Portuguese in the script. By so doing, I hope to further various dramatic functions of the script and provide something more meaningful than would be provided by either language alone.”

Eric collaborated with Fahrer on on the final draft of his translation and plans to film the project in the hopes that the piece might continue to be developed both in the US and Brazil. The production features IU students and community members, most of whom are making their premiere on IU stages as well.